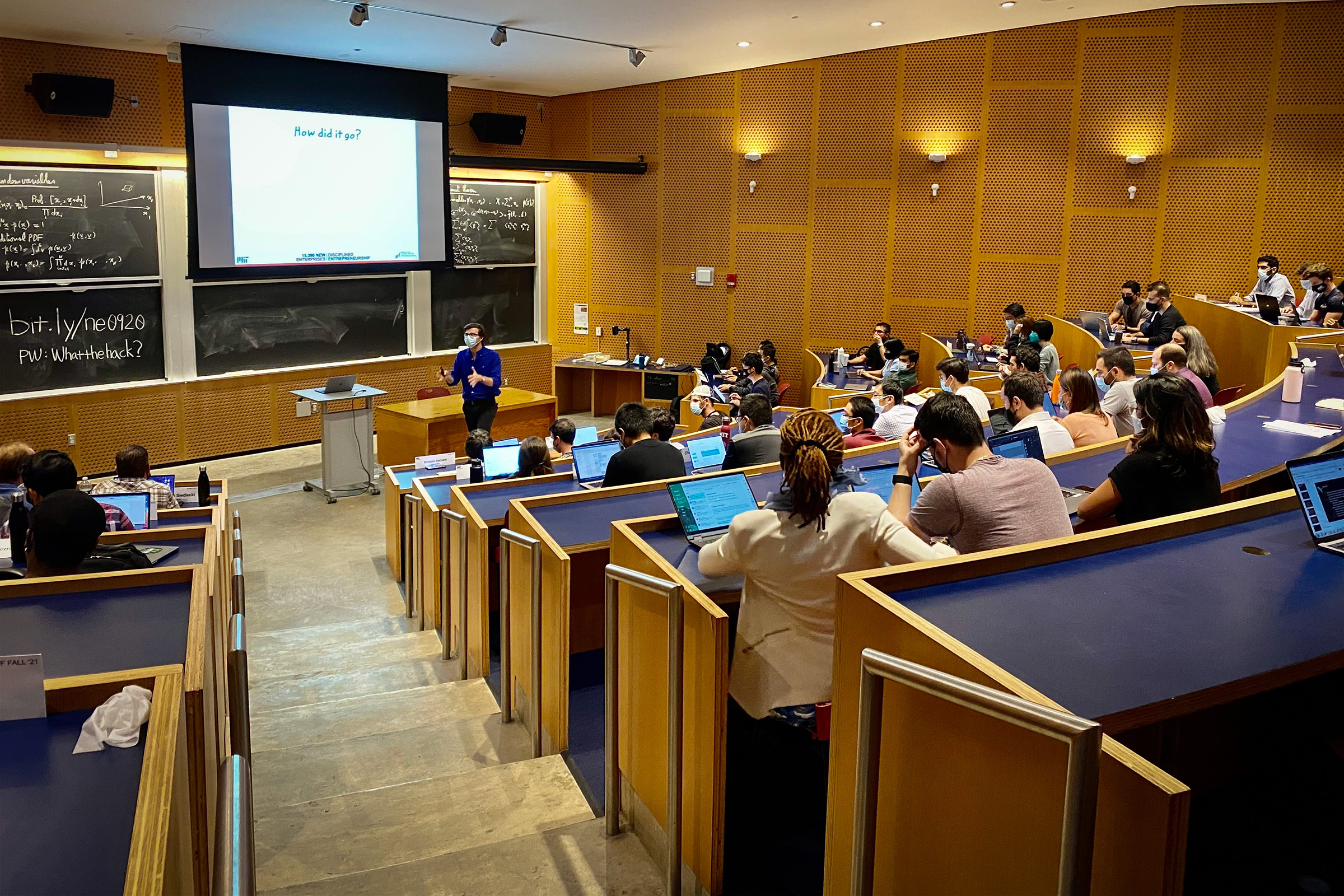 Historic course on entrepreneurship shows no signs of slowing down

In a process that has been going on for more than 60 years at MIT, this week a group of students came together to practice entrepreneurship at a breakneck pace designed to mimic the steep learning curve needed to start a business.

MIT’s 15.390 (New Ventures) course has been held annually since 1961 – a time when entrepreneurship education was just an obscure idea. Indeed, many people believe that New Enterprises is the nation’s oldest entrepreneurship course, and its mark on the Institute and the greater Boston area has been profound.

Over the course of a semester, the project-based class challenges students to form teams, pursue business plans, and respond to feedback given during mock board meetings.

“The goal of the course is to prepare students for one of two things: maybe they want to pursue a startup and now they have a plan to put into practice, or maybe they are going to take that process and drop it off at another organization, whether as a researcher, an employee at a large corporation, or a non-profit,” says Paul Cheek, senior lecturer at the Sloan School of Management in MIT, which started teaching new businesses in 2020. “Whatever they do, they will go with entrepreneurship and skills.

The format is designed to create entrepreneurs, not businesses. Yet an impressive number of classroom projects have turned into successful businesses over the years. These companies then introduced impactful products to the world, became pillars of the local tech ecosystem, and pioneered new industries.

Bill Aulet, who has helped teach the course for the past 12 years as managing director of the Martin Trust Center for MIT Entrepreneurship, thinks New Enterprises exemplifies MIT’s culture of ensuring that classroom work has an impact on the world.

“When MIT started, it was a home for immigrants and children of immigrants who were part of the Industrial Revolution, so we still do things differently,” says Aulet, who is also a professor of practice at Sloan. MIT School of Management. “We have a deep culture of entrepreneurship. It’s been here for a long time, and when people say, “You’re doing a good job,” you have to say, “It was here before I came, and it will be here long after I’m gone.

MIT was very different in 1961 than it is today. But a trend towards the commercialization of scientific research was evident after a world war in which physicists had played a decisive role, and a number of companies had managed to grow out of the huge wartime laboratories of MIT.

Richard Morse ’33, a lecturer in what was then called MIT’s School of Industrial Management, was among those who walked onto MIT’s bustling campus with a new idea in 1961. Morse had founded the National Research Corporation (NRC), best known for inventing frozen orange juice. concentrate and create the Minute Maid Corporation. He wanted to formalize the process of commercializing new technologies for students. New Enterprises was born.

Morse taught the class, which was limited to 15 students, with the help of outside professionals and contractors rather than professors. Over the years, the course has evolved to meet changing conditions and growing demand in the same way a business might.

After Morse, he was taught by Russell Olive ’52 and then Barbara Bund, who introduced entrepreneurial marketing to students. Professors Eric von Hippel ’68 and Ed Roberts taught for an interim period to accommodate the growing number of students applying. Over the next few decades, 20% of the class’s seats were reserved for engineering students, reflecting MIT’s highly interdisciplinary approach to entrepreneurship.

As students put what they had learned into practice, new companies began to play a formative role in the industries for which MIT and Cambridge are well known today. Among the first students of the course was Robert Swanson, who would go on to found Genentech, which developed synthetic insulin. The company is also widely credited with founding the biotechnology industry.

In the 1980s, Jon Hirschtick, who advanced computer-aided design (CAD) by founding companies such as SoldWorks and OnShape, wrote the business plan for his first company in New Ventures. Other successful entrepreneurs, including Aulet, who took the course as a student in 1993, credit Nouvelles Entreprises for teaching them the ropes of entrepreneurship.

More recently, the start-up of several anchor companies in the Boston area can be traced back to new ventures.

“I basically took New Enterprises twice,” says Brian Halligan MBA ’05, who co-founded Hubspot, the Cambridge-based marketing software giant, with Darmesh Shah SM ’06. “The first time, I worked on another idea. The following semester, Dharmesh followed him and we accompanied Hubspot throughout the course. I think it’s the best course I’ve ever taken.

Nowadays, the course begins by asking students to come up with business ideas. Instructors then run sessions around building teams, discovering and interviewing clients, and developing a business plan. Students have two mock board meetings throughout the semester, where experts give feedback on their plan and try to identify gaps they need to fill in their business.

The class is a melting pot of undergraduates, masters students, doctoral candidates and mid-career Sloan Scholars, as well as students from Harvard University and Wellesley College.

“It’s a fun and entertaining class,” says Cheek, who notes that students are graded on how well they apply the entrepreneurial concepts they are taught and how well they respond to feedback. “You look around the room and people are laughing and enjoying the process. It’s not just about “doing the work and going to class”. They also embrace the entrepreneurial spirit.

New Enterprises is designed to be the beginning of students’ entrepreneurial journey. Instructors often direct students to other entrepreneurial support offerings on campus when the semester is over, such as industry-specific entrepreneurship courses at Sloan or programs like the MIT Sandbox Fund, Legatum Center, and the Venture Mentoring Service.

No one really has a complete list of all the companies that have come out of new ventures, but Aulet says he’s often contacted by alumni who cite the course as a launching point for their business. Over the past few weeks, this has included the founding teams of Klarity and Lightmatter, who just raised an additional $98 million in capital to fund their continued growth.

“It’s incredibly gratifying to hear these entrepreneurs talk about their successes in making a positive impact on the world,” says Aulet.

Cheek says the fact that the course is now over 60 years old underscores the interdependence between MIT’s founding philosophy and the spirit of entrepreneurship.

“It’s so closely tied to MIT’s motto, ‘mens and mans’ [“mind and hand” in Latin]says Cheek. “Entrepreneurship is not just understanding, it is going through a process and practicing. This process has evolved over time. This class has iterated so many times to improve and increase the value of entrepreneurship education, and it’s something that definitely won’t stop.

/University release. This material from the original organization/authors may be ad hoc in nature, edited for clarity, style and length. The views and opinions expressed are those of the author or authors. See in full here.
Share FacebookTwitterGoogle+ReddItWhatsAppPinterestEmail